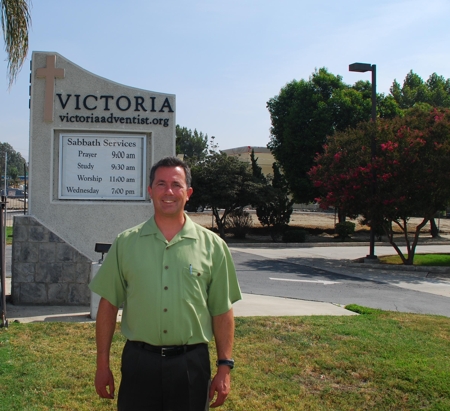 My work:  I relish being a pastor.  It gives me the opportunity to be involved in peoples' lives, to help people to apprehend the work of God.  To be present in times of need.  To help people open their lives to the possibilities of God's word.  I enjoy the role of teacher as it brings new insights and understandings to people. I have had the honor of being Victoria's pastor since 1998. I have served several congregations prior to Victoria, among them are the Campus Hill Church (1986-1987, 1996-1997) Riverside Community Church (1993-1996) Ontario Seventh-day Adventist Church concurrently with the Rancho Cucamonga Adventist Company (1991-1993) and as a co-founding pastor (with Sheryll) of the Church at Lake Berryessa (1984-1986.)  I also serve as a Collaborating Faculty member for Pastoral Theology of the La Sierra University School of Religion and as a Contract Teacher for Loma Linda University School of Religion.

My education: I graduated with an M.Div. from Andrews University (1991) from Pacific Union College with a B.A. in Theology: Emphasis in Pastoral Ministry (1985) and from Loma Linda Academy (1981.)

My family:  I am married to Sheryll Prinz-McMillan.  We have been married since 1986.  Sheryll is currently the Executive director of the Christian Counseling Service in Redlands.  She is trained both as a pastor and as a Marriage and Family therapist, retaining licenses and credentials for both professions.  She served as Victoria's pastor prior to my arrival beginning in 1993.  We have two daughters and a son.

My story:  I grew up in Loma Linda.  My father was a professor in the School of Medicine and my mom a nurse.  Our household included four children.  We lived in Reche Canyon, in the hills south of Loma Linda.  The rural upbringing taught me to love the land, to appreciate hard work.  Our family always had a large garden.  I remember spending Sundays and often after school weeding strawberries, corn, beans or squash.  As a youngster I was always delighted at the first sprouting plants of spring.  Often while we worked, planting, weeding, picking or processing, I remember my parents singing hymns or choruses.  Their love for God rubbed off on me.  As a child I was terrified of God, but sometime around age 13, I heard a sermon by H.M.S. Richards, Sr. on the radio.  His text was John 3:16.  It was then that I realized for the first time that God was not looking for reasons to punish me but was instead looking for ways to express his love for me.  I started reading the Bible for myself. The Gospel of John and Paul's letter to the Romans became my favorite books.   During my high school and early college years I believed that I was headed toward a Bible teaching career. I spent three summers working as a Counselor at Pine Springs Ranch.  At College I was enjoying my volunteer work in area churches, and felt affirmed in pastoral roles.  I took a summer job as an assistant pastor in Yreaka, California.  I found the work to be very enjoyable.  My senior year in college I started dating Sheryll, another theology major.  Together we answered a call to help form a church for an isolated resort community at Lake Berryessa.  We enjoyed working together and we fell in love.  I continued working at Lake Berryessa while Sheryll completed her final year at PUC.  We were married and were soon hired as pastors in the Southeastern California Conference of Seventh-day Adventists.  I'm looking forward to how the rest of my story will continue to unfold through God's grace.